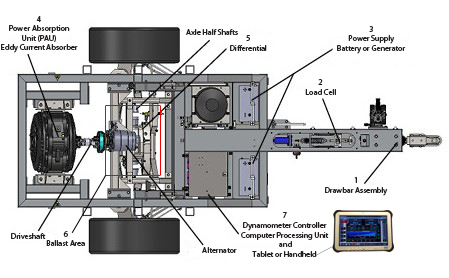 The Seven Key Elements of a Towing Dynamometer

A Towing Dynamometer (dyno) is a mechanized trailer towed behind a vehicle. It is an efficient tool to apply measured load to a vehicle and to simulate positive and/or negative slope. This is achieved through the seven elements of a Towing Dynamometer:

The Drawbar Hitch is much like a conventional trailer hitch in that it attaches to the test vehicle with a common ball, pintle or king pin depending on the trailer application. The Drawbar (the arm attached to the hitch) is designed to slide back and forth with robust bearings or cam rollers.

The Load Cell is a transducer that creates an electrical signal when expanded or compressed. The electrical signal, when calibrated to a known scale, is what indicates the amount of positive or negative load produced by the Towing Dynamometer.

In a Towing Dynamometer application, one end of the Load Cell is directly linked to the sliding Drawbar assembly and the other end to the frame of the Towing Dynamometer. When the test vehicle accelerates or decelerates, the drawbar will pull or push on the Load Cell creating a positive or negative electric signal or load. The load or force is most commonly measured in pounds or Newtons of force.

A power source is required to power the electronics. This can be accomplished by either a bank of batteries charged by an alternator or by an onboard generator. Batteries are quiet and are fairly easy to use and maintain. However, most alternators are not able to effectively charge the batteries enough for long periods of low speed testing. Therefore, a generator is used in place of the batteries, which can produce an ample supply of power for both low and high speed testing.

The PAU is attached to the dynamometer’s Differential through a driveshaft. From the Dynamometer Controller the operator is able to vary the electric current or strength of the magnetic field, which allows or restricts the rotor’s rotation.

The Differential is the main component, which takes the input from the PAU through the driveshaft and transmits that force to the axles rotating the wheels and tires. Various gear ratios can be used to affect the desired low or high-speed range performance of the dynamometer.

Most Towing Dynamometers are made as light as possible so that they can accommodate a wide range of vehicle weights. The intention is to have enough weight to fully load the vehicle but not too much weight, which would make it unsafe to tow.

An operator may choose to lighten the weight when doing light duty drawbar loads in an effort to keep the minimum drawbar load as small as possible.

Understanding the Ballast requirement is critical to a successful Towing Dynamometer test.  The weight on the axle(s) needs to be enough so that the tires don’t “skid” under the desired drawbar pull. Likewise, there needs to be enough weight on the drive axle(s) of the test vehicle for the same reason. Properly placed and applied ballast will greatly improve the test results and overall accuracy of the Towing Dynamometer.

The equation for determining proper Ballast is: Drawbar Pull lbs. / 0.7 = Weight in lbs. on Tires

The main CPU mounted in the dynamometer receives inputs such as force, temperature, voltage, current, pressure and speed. It is also able to calculate power, torque and in some cases, actual slope.

The handheld controller or tablet uses a software application or user interface as a means to select the desired operation. Most Towing Dynamometers offer three simple modes of operation:

Closed Loop Load: The dynamometer controls the load according to the load input from the controller and the operator controls the speed with the accelerator.

Manual Load: The operator simply increases or decreases the load from the controller with a knob, up or down arrow or keyed entry.

Other advanced Towing Dynamometer control systems may include features such as hill simulation and auto-run test profiles. 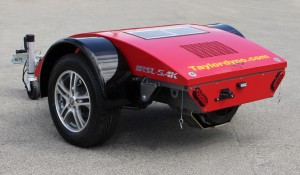 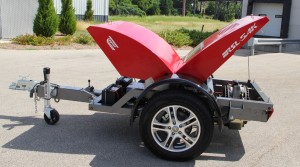