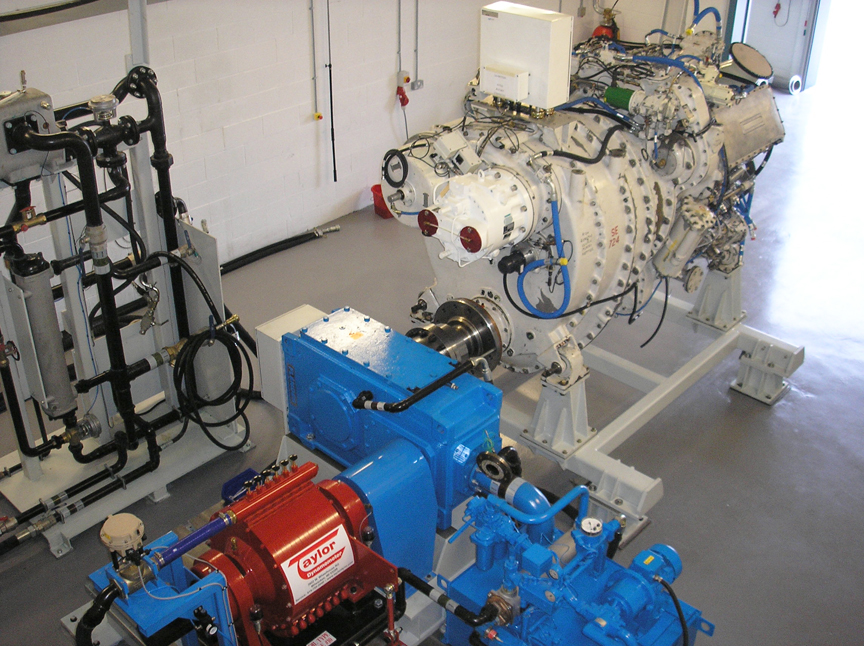 RRDSG required a new test facility to enable validation testing of new spare parts for their (Napier) Deltic 9 diesel engines. RRDSG’s original facility had a fire and the majority of their spares parts were lost. So new parts were re-drawn and then tested for performance before fitting to the engines that are in service.

The partnership of Taylor Dynamometer and Dynamometer Services Group (DSG) collaborated on the project. DSG built the test stand while Taylor provided the equipment for the test facility based around Taylor’s DX37 water brake (hydraulic) engine dynamometer.

Because of the two-stroke design of the engine and the reliance of engine control without the presence of a governor or limiter, the performance of the dynamometer and control system was paramount to ensure steady state load control with minimal overshoot.

Also, the addition of a Siemens’ Flender Speed-Increasing Gearbox was used to bring the shaft speed into the speed range of the sensibly-sized DX37 engine dynamometer.

This was a complicated project due to the nature of the engine and the fact that the majority of staff, with the knowledge base associated with the engine, had either left the company or retired. Completion of the project provided RRDGS with a fully-operational test bed which subsequently completed the validation of the parts and kept the engines in service.

Taylor Dynamometer – Everything you need to succeed.   Contact us today with your testing challenges (414) 755-0040, sales@taylordyno.com.